ScyllaDB is an open source NoSQL database that offers the horizontal scale-out and fault-tolerance of Apache Cassandra, but delivers 10X the throughput and consistent, low single-digit latencies. Implemented from scratch in C++, ScyllaDB’s close-to-the-hardware design significantly reduces the number of database nodes you require and self-optimizes to dynamic workloads and various hardware combinations.

Material Views automate the tedious and inefficient chores created when an application maintains several tables with the same data organized differently. Data is divided into partitions that can be found by a partition key. Sometimes the application needs to find a partition or partitions by the value of another column. Doing this efficiently without scanning all of the partitions requires indexing.

People have been using Materialized Views, also calling them denormalization, for years as a client-side implementation. In those days, the application maintained two or more views and two or more separate tables with the same data but under a different partition key. Every time the application wanted to write data, it needed to write to both tables, and reads were done directly (and efficiently) from the desired table. However, ensuring any level of consistency between the data in the two or more views required complex and slow application logic.

As usual, the ScyllaDB version is compatible – in features and CQL syntax – with the Apache Cassandra version (where it is still in experimental mode).

ScyllaDB Open Source 3.0 introduces production-ready global secondary indexes that can scale to any size distributed cluster — unlike the local-indexing approach adopted by Apache Cassandra. The secondary index uses a Materialized View index under the hood in order to make the index independent from the amount of nodes in the cluster. Secondary Indexes are (mostly) transparent to the application. Queries have access to all the columns in the table and you can add and remove indexes without changing the application. Secondary Indexes can also have less storage overhead than Materialized Views because Secondary Indexes need to duplicate only the indexed column and primary key, not the queried columns like with a Materialized View. For the same reason, updates can be more efficient with Secondary Indexes because only changes to the primary key and indexed column cause an update in the index view. In the case of a Materialized View, an update to any of the columns that appear in the view requires the backing view to be updated.

Global secondary indexes minimize the amount of data retrieved from the database, providing many benefits:

Allow filtering is a way to make a more complex query, returning only a subset of matching results. Because the filtering is done on the server, this feature also reduces the amount of data transferred over the network between the cluster and the application. Such filtering may incur processing impacts to the ScyllaDB cluster. For example, a query might require the database to filter an extremely large data set before returning a response. By default, such queries are prevented from execution, returning the following message:

Bad Request: Cannot execute this query as it might involve data filtering and thus may have unpredictable performance.

Unpermitted queries include those that restrict:

However, in some cases (usually due to data modeling decisions), applications need to make queries that violate these basic rules. Starting with ScyllaDB Open Source 3.0, queries can be appended with the ALLOW FILTERING keyword to bypass this restriction and utilize server-side filtering.

The benefits of filtering include:

ScyllaDB Open Source 3.0 introduces support for a more performant storage format (SSTable), which is not only compatible with Apache Cassandra 3.x but also reduces storage volume by as much as 3X. The older 2.x format used to duplicate the column name next to each cell on disk. The new format eliminates the duplication and the column names are stored once, within the schema.

The newly introduced format is identical to that used by Apache Cassandra 3.x, while remaining backward-compatible with prior ScyllaDB SSTable formats. New deployments of ScyllaDB Open Source 3.0 will automatically use the new format, while existing files remain unchanged.

Hinted handoffs are designed to help when any individual node is temporarily unresponsive due to heavy write load, network weather, hardware failure, or any other factor. Hinted handoffs also help in the event of short-term network issues or node restarts, reducing the time for scheduled repairs, and resulting in higher overall performance for distributed deployments. Originally introduced as an experimental feature in ScyllaDB Open Source 2.1, hinted handoffs are another production-ready feature in ScyllaDB Open Source 3.0. Technically, a ‘hint’ is a record of a write request held by the coordinator until an unresponsive replica node comes back online. When a write is deemed successful but one or more replica nodes fail to acknowledge it, ScyllaDB will write a hint that is replayed to those nodes when they recover. Once the node becomes available again, the write request data in the hint is written to the replica node.

ScyllaDB Open Source 3.0 builds on earlier improvements by extending stateful paging to support range scans as well. As opposed to other partition queries, which read a single partition or a list of distinct partitions, range scans read all of the partitions that fall into the range specified by the client. Since the precise number and identity of partitions in a given range cannot be determined in advance, the query must read data from all nodes containing data for the range. 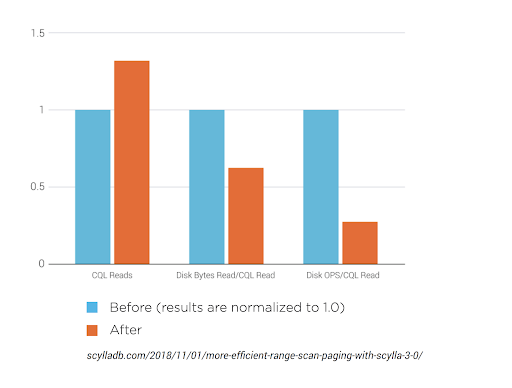 To improve range scan paging, ScyllaDB Open Source 3.0 introduces a new control algorithm for reading all data belonging to a range from all shards, which caches the intermediate streams on each of the shards and directs paged queries to the matching, previously used, cached results. The new algorithm is essentially a multiplexer that combines the output of readers opened on affected shards into a single stream. The readers are created on-demand when the partition scan attempts to read from the shard. To ensure that the read won’t stall, the algorithm uses buffering and read-ahead.

Streaming is used during node recovery to populate restored nodes with data replicated from running nodes. The ScyllaDB streaming model reads data on one node, transmits it to another node, and then writes to disk. The sender creates SSTable readers to read the rows from SSTables on disk and sends them over the network. The receiver receives the rows from the network and writes them to a memtable. The rows in memtable are flushed into SSTables periodically or when the memtable is full. In ScyllaDB Open Source 3.0, stream synchronization between nodes bypasses memtables, significantly reducing the time to repair, add and remove nodes. These improvements result in higher performance when there is a change in the cluster topology, improving streaming bandwidth by as much as 240% and reducing the time it takes to perform a “rebuild” operation by 70%.

You can read more details about ScyllaDB Open Source 3.0 in the Release Notes.