In this ScyllaDB vs Cockroach benchmark, we compare what we consider the best-of-breed in NoSQL versus the best-in-class in NewSQL CockroachDB database. Admittedly biased, we selected ourselves for NoSQL. For NewSQL, we chose CockroachDB. The latter represents distributed SQL, the segment which represents not only the SQL API but also the distributed relational database model.

Obviously, the ScyllaDB vs CockroachDB comparison is of the apples-and-oranges variety. We expect ScyllaDB will be faster — providing lower latencies and greater throughputs — while CockroachDB  should have stronger consistency and be friendlier to use with its SQL interface. Our goal was to put forward a rational analysis and put a price tag on the differences in workloads that could be addressed by the two databases. So we won’t cover SQL JOINs, which are supported by CockroachDB alone, and we won’t cover time-series workloads, where ScyllaDB has a clear design advantage.

It’s worth noting that the distinction between NoSQL and NewSQL will evolve over time. And speaking of evolution, please visit our Project Circe page to see what we’re doing at ScyllaDB to bring stronger consistency (and more) to our NoSQL database.

For this ScyllaDB vs CockroachDB performance comparison, we ran the well-known and widely adopted Yahoo! Serving Benchmark (YCSB). The YCSB is an open-source specification and benchmarking framework that is commonly used to measure scalability and performance (defined as latency) in databases.

To measure database performance under various workloads, we executed a series of benchmarks defined in the Yahoo! Cloud Serving Benchmark (YCSB) test suite. The YCSB tests encompass a variety of workloads (A through F), each of which represents a different database access pattern. The six benchmarks represent the following workloads:

Table 1 – The setup for running YCSB against ScyllaDB and CockroachDB

As stated above, the initial data load for both databases was meant to be 1 billion keys. While the loading ran smoothly for ScyllaDB, CockroachDB latency and throughput degraded from 12K operations per second (OPS) to 2.5K OPS. By our estimates, loading 1billion keys would require at least 111 hours to complete. In our test, the CockroachDB cluster became unresponsive after 5 hours, and also generated critical errors in the log exposing some CockroachDB limitations.

As a workaround, a smaller dataset of 100 million keys was used with CockroachDB. The smaller dataset loaded in 7 hours without any errors. Figure 1, below, demonstrates the slowing rate of insert statements on the CockroachDB cluster as service latency increased. 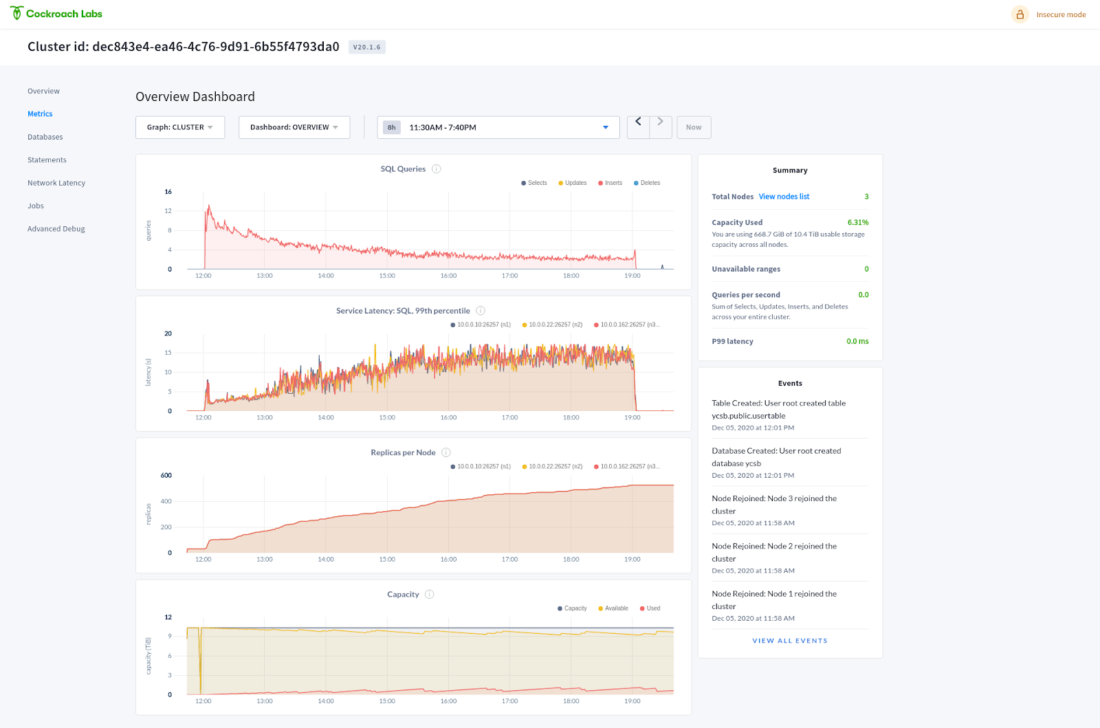 With datasets loaded, we were ready to run YCSB workloads against the ScyllaDB and CockroachDB clusters.

Tests were performed against ScyllaDB from a dedicated AWS EC2 c5.9xlarge instance acting as a client, with 32 vCPU, 72 GB RAM, 10GiB . The following command was used for all YCSB workloads, A, B, C, D, E and F:

Tests were performed against CockroachDB from a dedicated AWS EC2 c5.9xlarge instance acting as a client, with 32 vCPU, 72 GB RAM, 10GiB . The following command was used for all YCSB workloads:

For the majority of YCSB workloads, ScyllaDB demonstrated better performance with lower, predictable latencies, even while working on a dataset 10x larger than CockroachDB.

Figure 2: Throughput and latency of ScyllaDB and CockroachDB per YCSB workload.

In the following sections, we examine CockroachDB vs ScyllaDB test results for each YCSB workload.

YCSB workload A performs 50% single-row lookups and 50% single-column updates. According to YCSB documentation, workload A simulates a session store that records recent actions. As such, it is a highly contended workload.

For the 1 billion key dataset, ScyllaDB managed to serve 150K-200K OPS on most of the workloads at 75-80% CPU utilization with reasonable latency. As seen in Figure 3, on average, ScyllaDB achieved 150K OPS with p99 latencies under 12 ms at 75% load.

Meanwhile, for the 100 million key dataset, the CockroachDB managed to serve 16K OPS. As seen in Figure 3, on average, CockroachDB achieved 16K OPS with p99 latencies around 52 ms at 73% load.

Figure 3: ScyllaDB and CockroachDB results for YCSB workload A

ScyllaDB execution results for workload A for 100 million and 1 billion key datasets:

CockroachDB Execution results for Workload A for the 100 million key dataset:

Workload B performs 95% single-row lookups and 5% single-column updates. While less contended than workload A, workload B still bottlenecks on contention as concurrency grows. Using column families slows down the single-row lookups but speeds up the updates. A real-world use case involving workload B is photo tagging. A tag is an update, but the majority of operations are reads.

As demonstrated in Figure 4, ScyllaDB achieved 150K OPS against the dataset of 1 billion keys. ScyllaDB’s p95 latencies were 1.9 ms, while p99 latencies were 7 ms.

ScyllaDB results for workload B:

CockroachDB results for workload B:

Workload C consists entirely of single-row lookups. A real-world application of workload C is a user profile cache, where profiles are constructed elsewhere – for example, in Hadoop. Using column families slows down single-row lookups, so, by default, they are not used.

As demonstrated in Figure 5, ScyllaDB achieved 150K OPS against the dataset of 1 billion keys. ScyllaDB’s p95 latencies were 2.4 ms, while p99 latencies were 7 ms.

As demonstrated in Figure 6, ScyllaDB achieved 180K OPS against the dataset of 1 billion keys. ScyllaDB’s p95 latencies were 3 ms, while p99 latencies were 5.5 ms. Of all workloads, this produced ScyllaDB’s best performance.

Running against the dataset of 100 million keys, CockroachDB achieved its best throughput results, managing 40K OPS, with p95 latencies of 100 ms, and p99 latencies of 176.2 ms. Further increasing the load did not increase throughput. Increased load only contributed to higher latency and its variance.

Workload E defines operations that are short-range scans, rather than queries against individual records. According to the YCSB benchmark, the workload involves “threaded conversations, where each scan is for the posts in a given thread assumed to be clustered by thread ID.” As expected, this workload produced the worst performance – only 10k operations per second.

YCSB Workload E is implemented in a way that does not play to the strengths of either ScyllaDB or CockroachDB features. In ScyllaDB, range partition scans are token-based, and tokens are randomly distributed throughout the cluster. As such, many random reads across multiple nodes are required to satisfy a single scan request. Unsurprisingly, this is not an efficient way to do range-scans. Yet while range scans are not the main advantage of ScyllaDB, ScyllaDB still did well enough and outperformed CockroachDB by 5x.

As demonstrated in Figure 7, ScyllaDB achieved 10K OPS against the dataset of 1 billion keys. ScyllaDB’s p95 latencies were 14 ms, while p99 latencies were 21 ms.

And finally, workload F performs 50% single-row lookups and 50% single-column updates expressed as multi-statement read-modify-write transactions. As such, it is highly contended. A real-world example of workload F is a user database, in which user records are read and modified by the user, and which also records user activity.

As demonstrated in Figure 8, ScyllaDB achieved 100K OPS against the dataset of 1 billion keys. ScyllaDB’s p95 latencies were 10 ms, while p99 latencies were 26 ms.

To summarize the results of the YCSB CockroachDB vs Sylla benchmark comparison:

Modern, cloud-native applications often require high availability and predictable low latency. Such workloads are ideal for ScyllaDB. Requirements for strong consistency are less common. Workloads characterized by modest dataset size, and which require strong consistency guarantees and transactions along with a relational database model, involving JOINs, are ideal for a NewSQL database such as CockroachDB.