ScyllaDB Enterprise customers are encouraged to upgrade to ScyllaDB Manager 2.2 in coordination with the ScyllaDB support team.

ScyllaDB Manager breaks each table repair task to multiple small chunks. While this is useful for large tables, it proves to add redundant time when repairing small tables, for example system tables, resulting in a long repair time even for clusters with very little data.

In Manager 2.2, tables below configurable threshold (1GB by default) will be treated as small and repaired in a single repair command; this may affect production performance depending on the intensity of the operations.

Manager 2.2 automatically breaks repair tasks to parallel tasks, running independently on distinct ranges of the token ring. Each node can take part in at most one repair at any given moment. Parallel repair can reduce the repair time in a factor of the number of nodes divided by the replication factor (RF). For example, a repair on a cluster of 12 nodes, Keyspace with RF=3 and default parallelism, can run up to x4 times faster, dependent on the online requests load.

User can control the level of parallelism using the new --parallel parameter.

The following represents the saving in repair time in a 9 nodes cluster, all in the same data center, while serving requests in real time with 50% load. 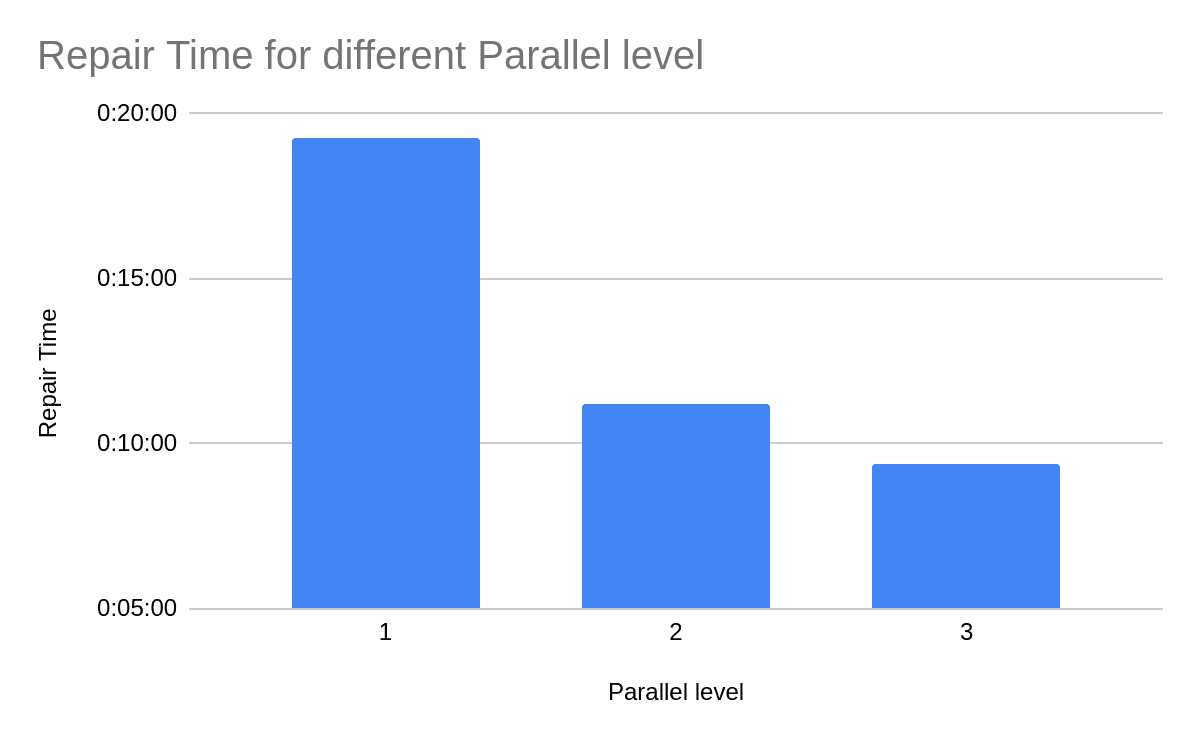 Refer to the ScyllaDB Manager documentation.

Control over parallelism and intensity during repair

A new command sctool repair control is added. It lets users change parallelism and intensity (added in 2.1) of an ongoing repair, without ever restarting the task. In addition to that commands sctool repair update and sctool backup update let you update task specification of existing tasks for future runs.

Note: starting with ScyllaDB Enterprise 2020.1 and ScyllaDB Open Source 3.1, ScyllaDB uses row level repair. This greatly improves repair performance, including ScyllaDB Manager users. As a side effect, the intensity flag while still supported, has a smaller effect on the repair time (see more in the documentation).

Manager 2.2 now supports backup to GCP in a similar way to the existing AWS s3 support.
To enable, use the sctool backup command, for example

Where manager-prod-backup is the target bucket.

GCP back up default rate was tested to provide fast upload rate, with minimal impact on line requests.

A new (enabled by default) dynamic timeout parameter for each DC is based on measurements on RTT of recent probes. This fixes the issue of reporting remote DC nodes as not responsive due to longer latency values.

Monitoring ports used by ScyllaDB Manager and Manager Agent was overlapping with users’ existing applications. To fix this, we changed the default ports as follow:

For most users, the only ports used are the ones used by Prometheus (highlighted above). Please make sure to either:

For the first, make sure your firewall / security groups open the new monitoring port, and close the old one.

The following parameters has been removed from Manager configuration

You can use ScyllaDB Monitoring Stack 3.5 with -M 2.2 option to get Manager 2.2 dashboards.